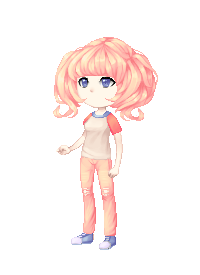 Welcome to my profile - let me know if it does anything weird. I'm not too good at this CSS thing...

Call me Bloo. I'm a late-start college student, or...someone who started college at an older than average age. I'm a pre-nursing student. Currently, I'm attempting to complete Anatomy & Physiology I, Algebra, and US History from 1877 to Present. Can you guess which class is actually interesting to me?

I've been married for seven years (as of August 20th) and have a six year old son. I love my family very much and am doing everything I can to better myself so that we all have a brighter future. ♥ My husband suffers from PTSD and severe depression, anxiety, and ADD. My son also has ADD. It's a mad house over here.
:P

Gemma and Audrey were ferals that we adopted after they showed up on our door step and refused to leave. We adopted them in different but consecutive years. Gemma was the easiest of the two to domesticate, but she made our two boys sick and we had snotty, gross cats for a week. Ew. Audrey was hell to domesticate, and we have the scars to prove it. She was extremely violent toward the other cats and us. We kept her isolated for three months before we officially decided to keep her (after much deliberation). We probably would have given up on her if the shelters nearby weren't full, honestly...

I'm a huge Lady Gaga and Adele fan, I play a lot of Guild Wars 2 (and love to convert people), and like to online shop in my spare time. (Help!) I really love piercings and would have more if my future profession allowed them, but for now I have my septum and helix pierced, as well as double lobes. I'm getting my first tattoo soon, too! ♥

I keep up with politics and think it's very important for people to stay informed. I'm one of those people who think the South needs to revisit history class. I attended the Women's March on Washington as well as the Science March, and I attend Counter Protests for Planned Parenthood when I can. I am a feminist. Typically, none of these things will be brought up by me in normal conversation, but if you're the type of person who can't deal, then - well fam - we can't be chill.

gaming, eating, and studying...help, i need a life!