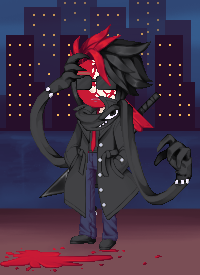 The sun was shining high up in the sky... not that it really penetrated down to the forest floor through the thick canopy of leaves and branches above his head. Small rays of sunshine pierced through holes in the treetop cover, and small meadows seemed like havens of light in the darkness of the forest.

Not that he cared much. He was just continuing to move forward, his steps heavy, his posture sloppy and droopy. His dull clothes matched his grey eyes, and almost caused him to blend in with the shadows.

Several pairs of eyes were glowing as they stared at him from the darkness, but either he didn't notice, or didn't care.

Instead, he found a large rock, and climbed up on it.

"Guess this is as good a place as any." he mumbled, sprawling out on it.
Why can't I just be
The one
For once!?
Report 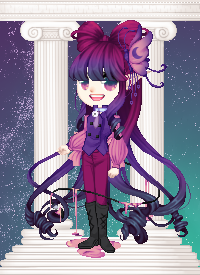 Friend PM Trade
Donator — Schwifty Posted 2 years ago ( 2019/02/5 03:22:19 )
There was a rustling in the bushes around the clearing. A young man who dressed and looked like a girl popped out, leaves in his messy teal hair with pink side stripes, from one of the bushes.

The yellow eyed boy sort of scampered over to the man resting on the rock kneeling on his knees at the edge of the large boulder. His small round, tanuki like eyebrows raised as he peekd over at the man. his tail swished curiously, the talon at the end clacking when it hit something, like the boulder.

"Whatcha doin?" the boy asked, his nose resting on the cold stone.
Report

"Laying here." he then responded, not looking over.

"Considering sleep." he went on.

"Or whatever comes closest." he mumbled further. He then paused for a moment, before his eyes shifted in the direction of the newcomer.

"You shouldn't talk to strangers." he told him.

"For all you know, I could plan to hurt you." he said further, before looking back up towards the canopy.
Why can't I just be
The one
For once!?
Report

The boy smiled his hair tangled around his black horns. He held out a slightly scaled hand to be shaken. "My name is Eke" He seemed oblivious to any danger he could be despite it being pointed out there could be.
Report

The man looked at the extended hand, seeming to just stare at it.

"..." he was silent for a moment, before sighing and draping his other arm over him, grabbing the hand.

"Ryker." he said, introducing himself.

"The hell are you doing in these woods, anyway?" he asked. "These woods are no place for people." he commented.

"Normally people come here to die to the wildlife." he then muttered.
Why can't I just be
The one
For once!?
Report

He pulled his hand away and put his hand in his jacket. Out from the pocket he produce a single hard candy wrapped in bright blue wrapping and extended his hand.

"Wnat a treat?" He offered as he opened another, softer candy, and popped it into his own mouth.

Ryker raised an eyebrow as Eke said what he did, and offered him said treat.

"And escaping someone?" he asked him.

"Why? And who?' he asked further, looking around.

"You musta been desperate to get away, to come in THESE cursed woods." he muttered, looking at the glowing eyes that seemed to surround them.
Why can't I just be
The one
For once!?
Report

"Why would i tell someone i just met what im running from?" He chuckled his cheeks flushing a little. The wood did send a little bit of a chill down his spine but he ignored it. He simply smiled his hands behind his back.

"So then if the woods are cursed why are you here?"

"Well... that is a fair question about what you're running from." he admitted.

"And yes, cursed." he told him. "The beasts of this forest are stronger than anywhere else." he said. "Some say it's because of how they have to compete for what little prey wanders in here." he went on. "Some say a strange energy empowers the animals, but causes them to become rabid, essentially." he then said further.

"Regardless, nobody that ever comes in here makes it out alive." he then told him.

"Because I want to see if my own curse is stronger than the death curse in these woods." he said simply, getting off the rock. "I want to see if these woods have the skills to finally end my miserable suffering." he added, an unnerving plainness to his tone.
Why can't I just be
The one
For once!?
Report

The boy sat next to the larger man looking up. "Perhaps you just havent met the right person to travel with." He ate another candy.

On closer inspection, now that he was sitting next to Ryker, it appeared the boy was emaciated and pale. He had red rings under his eyes, usually indicitive of someone whos been sick recently.
Report

Ryker was about to answer, before he looked closer at Eke, seeing just how bad a shake he was in.

"Person to travel with?" he asked.

"We'll address that later, but what is up with your-" he started to ask, before they both heard a low growl emanating from within the floral that surrounded them.

"Maaaaaybe we'll save that discussion for later." he said further.

"Seems like one of the Sabre Wolves has decided that at least one of is is an entree."
Why can't I just be
The one
For once!?
Report

"Maybe we should get out of here? Or do you plan to fight?" He held a small bag closer to him. He felt nervous, but he didn't feel right leaving the seemingly suicidal man.
Report

"Do I plan to fight?" Ryker asked.

"Quite frankly, I'd be quite content to let the beast tear me apart." he said further, as a shaggy-haired grey and white wolf-like beast with long sabre teeth emerged from the woods.

Just as it did so, Ryker grasped lightly at his chest, right about where his heart was.

"Unfortunately... I'm going to fight, regardless of what I want." he admitted, a slight undertone of darkness to his voice now.
Why can't I just be
The one
For once!?
Report

He began to pull the man away from the wolf creature, his once tucked wings coming out, hoping he looked scarier. His yellow, slit pupiled eyes looked up at the man, almost pleadingly.

He wanted to be out of there. He didnt know why, but he didnt want to see this man to fight, or get hurt. Perhaps it was because he was tired of being alone.
Report

Normally when people tried to stop him from doing what he wanted to do, he pushed them away and brushed them off. But this time was different. Something about Eke was suppressing that reflex.

He then sighed, and shook his head.

The wolf kept its distance, but it was clear that it was merely assessing the situation. It was only a matter of time...
Why can't I just be
The one
For once!?
Report

His small, thin hand trembled in Ryker's. He ran as hard as he could, but he didn't go far. He stopped, sputtering and wheezing.

"I-I'm okay. I just need a moment" He popped a candy into his mouth hoping it'd keep him from fainting.
Report

Ryker looked at Eke as he sputtered, gasped, and wheezed, before narrowing his eyes.

The rustling around them grew louder, and suddenly, the wolf from earlier leaped out from the surroundings trees, its large fangs bared, its mouth wide open, drool frothing around its gums.

And it was leaping straight for Eke.

However, it never reached him, as Ryker was suddenly in between them, and his arm was extended out. His hand had grabbed the wolf's throat, and Eke could see that the arm looked to suddenly be more toned and muscular than before.

"...all right little doggie, let's teach you to play dead." Ryker said, almost sounding like a different person.
Why can't I just be
The one
For once!?
Report

He opened his mouth to say something but all that came out was another wheeze. He reached out to take Ryker's hand.

He saw his fingers tremble and pulled back. He didnt want to make things worse.
Report

The wolf gasped for air as it pawed impotently at the air. Its claws raked at Ryker's arm, but the man didn't even seem to notice. Or if he did, he didn't care.

He was silent, before he took the beast, and slammed its head down on a nearby rock.

A disgusting crunch was heard, and the wolf's body fell limp and lifeless.

"........." Ryker was silent for a moment, before he clutched at his chest, and collapsed to his knees, groaning in a fluctuating tone, between how he sounded recently, and how he sounded when they first met.
Why can't I just be
The one
For once!?
Report
ROCK-CONNAISSANCE!!!

Friend PM Trade
Donator — Schwifty Posted 2 years ago ( 2019/02/6 00:32:28 )
Eke walked over and placed a gentle hand on his back. His nails were painted black. His brows furrowed concerned for him.

"Take it easy. Whatever is wrong, i'm sure youll be okay" His voice squeaked and and cracked. He sounded as winded as he felt.